No private army in Bogo City

BOGO City Mayor Celestino “Junie” Martinez said the City of Bogo’s Anti-Criminality Task Force (CBACTF) is  an augmentation force in the city’s fight against crime and not a private army.

In  the 888 News Forum last Tuesday, Martinez said CBACTF reinforced the limited number of policemen that monitors incidents of crime.

Last year, administration candidates said they wanted Bogo City  and the entire fourth district of Cebu to be placed under the control of the Commission on Elections, citing the “distressing” situation in the area.

They also wanted the  CBACTF, a civilian task force formed by Martinez disbanded, disbanded, claiming the mayor is using civilian volunteers as his “private army.”

The complainants said the CBACTAF was  formed to serve the  Martinezes and  harass and intimidate the people of Bogo, especially those who opposed the family  in last year’s elections. 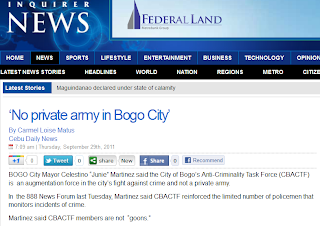 Mayor Martinez said there’s no reason to fear the civilian group because they are just residents of Bogo.
Martinez invited members of the media to visit Bogo City  and see how CBACTF helped maintain peace and order in the city.