Here are a few of the Social Programs of the City of Bogo through the City Social Welfare and Development Office (published in KANAAS): 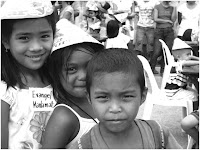 For the year 2011, the feeding program was held successfully in Barangay La Purisima Concepcion under the personal supervision of the CSWD head, staff, day care teachers and barangay officials. The program is implemented with the support of non-government organization(s).


In photo: children pose for the camera after a successful feeding activity. 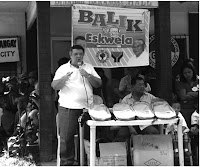 Beneficiaries : Children of three to four years who are enrolled in any Day Care Center in the City of Bogo.
Benefits : School supply set

This is an annual, LGU- funded initiative implemented under the auspices of the City Social Welfare office. At the start of the school year, a set of school supplies (bag, paper, crayons, pencil, eraser and sharperner) is given to the beneficiaries. For this year - the project has benefited a total of 1061 children.

Update: Another Balik Skwela Program will be conducted this coming June 2012 by the City Government of Bogo through the Office of the City Social Welfare and Development. 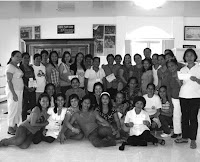 Beneficiaries : All Day Care Workers in the City of Bogo
Benefits : Availment of refresher-course in PES (Parents’ Effectiveness Service) and the Day Care Teacher’s curriculum

The facilitators were the MSWDO from Bantayan Island, Catmon along with a few day care teachers from the Regional Social Welfare and Development Office.

Beneficiaries : Indigent Senior Citizens over 77 years with no income and no support from famiy; with disability or health issues.
Benefits : Monthly Pension of five hundred pesos (PhP 500.00)

The Program is implemented under RA 9994 or The Expanded Senior Citizen’s Act of 2010. From the start of this year to date, 63 citizens in the city of Bogo who qualified under the implementing guidelines - have enjoyed the benefits of the program.

In photo: A beneficiary of the Social Pension Program was assisted by CSWD office staff.


RICE SUBSIDY THROUGH CASH FOR WORK

Beneficiaries : Disaster-affected or displaced small-scale farmers and fishermen
Benefits : Temporary employment for 11 days at 267 a day

This is a short-term intervention for those in the farming and fishing industry to help them cope with the rising prices of basic commodities. The participants of the program are required to use 50% of their pay to purchase rice and/or food.

In photo: Beneficiaries in the Cash-For-Work program in action.

The Bogo City Women’s Federation was organized so that the women may have an opportunity to initiate programs for livelihood.